Today is day 101 of having not pulled out an eyelash or eyebrow on my face! I am so proud of myself but I still have a long way to go....

Trichotillomania is a disorder that not very well known and pretty taboo if it is. If you went up to someone on the street and asked them what Trich was, I can pretty much guarantee you they would have no idea. So what is it:

Trichotillomania (trick-o-til-o-MAY-nee-ah) is a disorder that causes people to pull out the hair from their scalp, eyelashes, eyebrows, pubic area, underarms, beard, chest, legs or other parts of the body, resulting in noticeable bald patches. Hair pulling varies greatly in its severity, location on the body, and response to treatment. For some people, at some times, trichotillomania is mild and can be quelled with a bit of extra awareness and concentration. For others, at times the urge may be so strong that it makes thinking of anything else nearly impossible.

Trichotillomania (also referred to as TTM or "trich") is currently defined as an impulse control disorder but there are still questions about how it should be classified. It may seem to resemble a habit, an addiction, a tic disorder or obsessive-compulsive disorder. Most recently, it is being conceptualized as part of a family of "body-focused repetitive behaviors" (BFRBs) along with skin picking and nail biting. (Source)

My Trich started when I was in 8th grade. It was innocent enough...at first. I would find myself doing homework (particularly math homework) and I would simply start picking off the mascara on my eyelashes. It was comforting and felt good. It was just a mindless habit I got into. But soon I would start to accidentally pull out a few eyelashes while just trying to pick off the mascara. You may think this would hurt, but it really didn't to me. Through that whole year I really would only do it during homework or studying time at home, so there were no noticeable signs on my face, no one knew what was beginning to happen. But as time progressed I started to find real stress relief and comfort in pulling out my eyelashes and I started doing it more and more. While I was doing homework still, but also while I was on the computer, reading, or just alone in my room.

Soon (I don't remember when) but I started moving up to my eyebrows as well. At first these weren't as easy to pull out but soon my fingers got used to it and I began the damage on my eyebrows (and still my eyelashes). As I have mentioned before, I have struggled with stress and this just became my easy outlet. It felt so good to me to pull out the poor hairs on my face. I believe it was during my Sophomore year of high school that it began to be noticeable. I didn't think it was that big a deal with my eyelashes since if I wore eyeliner you really couldn't notice the gaps unless you were right in my face. But my eyebrows were a lot harder to hide. I began to lightly color in the gaps and sparse spots with some eyeliner. This worked for awhile and still no one (not even my family) said anything. But eventually it got so bad and harder to draw in and I told my mom what I did. I think she was surprised by how bad it actually was since she usually just saw the shading on my eyebrows and really didn't notice. 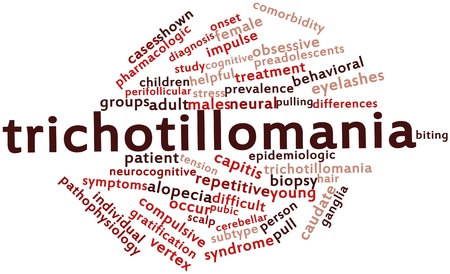 I then began to go through times where I would do less pulling and my eyelashes and eyebrows would start to slowly grow back. But these periods would not last. Once I had enough lashes and brows to pull put again or the stress would get to be to much I would start up full force. I knew I needed to stop and my  mom would keep saying it to me as well. But when I was just sitting there by myself, I would not care and I would just pull the hairs out. You might think why would she keep doing it if it was so noticeable now. But I can tell you it is SO hard to stop. It is like telling someone to stop blinking. It was such a natural thing for me and felt so good and calming! During my Junior year it was the worst. It got extremely obsessive to the point where I would make a pile of the hairs I pulled out and be happy when I pulled out a lot. I literally had no eyelashes left and my eyebrows kept dwindling down to until they were soon gone and I just had little spots of hair on the inner edge of both brows. Drawing my eyebrows in was the worst! They looked different everyday sine there was so little hair I had no guide as to the shape. Some days they would be thicker, thinner, darker, lighter. People must have noticed, but didn't know why, and would never dare ask. (Plus I was using black eyeliner...really stupid since I have brown hair. Yes eyebrows are darker, but the black made my face look so pale and just weird.)

My mom suggested tapping my fingers. Just wrapping a piece of tap around the tips so I wouldn't be able to get a grip on any of the remaining hairs. But this was seriously a pain in the ass. I would have had to keep tap on all the time while I was home. When I washed my hands it would fall off, and the tape would just get in the way and bother my fingers. So this little method didn't last. But I had to find a way to stop. I was able to control it a bit during Christmas time and they began to grow back. It was so weird to look at my face when they were growing. I got so used to having no eyebrows or lashes that I though I looked weird with them! And it was so itchy! When you have no lashes or brows and they begin to grow back...o man... it itches! And sometimes my new little stub lashes would poke my eyes, but that was better then when my eyelids would get stuck together when I had no lashes (I know graphic, TMI). But by April I started up again and all progress was gone. I told myself I would just finish out the year and then when the Summer arrived I would feel a lot more stress free and be able to find relaxation in other ways. So around June I stopped and starting marking a little blue dot on my calender for each day I didn't pull out a lash or brow. And now it has been 101 days since I have pulled out an eyelash or eyebrow. I wish I had taken before and after pictures, but I didn't so I can't show you the huge progress. My eyelashes have grown back completely, but my brows are still a bit thinner on the ends then they were before my trich started.

So like I said in the beginning of this post, my journey with trich is no where near over. Just because I haven't done any face pulling I have gotten into a huge habit of touching my eyelashes and brows. I don't pull the hairs out but I rub and touch the hairs on my face. I also started pulling hairs on my arms, other non-noticeable parts of the body and pinching off the split ends of my hair. I definitely do the split end thing a lot, even while in school. That is where I can see how Trich is a disorder that also encompasses skin picking and pulling. I do that. I hate that I touch my face so much especially. I wish I could stop this, but I need something to do with my hands. If it isn't pulling, then touching will have to do. So that is my next hurdle to get over, but right now I am just proud of myself for having my eyelashes and brows back (and not having to spend 10 minutes in the morning trying to draw them in)! I am also thankful that my Trich never moved up to my actual scalp. I think that is the most difficult to deal with. There is no way to hide the baldness that comes over time, especially for girls. Yes you can where a hat at first but if it doesn't get under control, you are in a bad situation.

Trich can lead to embarrassment, further stress, depression, guilt, anxiety, and isolation. I wish Trich had more awareness and support around helping those with it get through it. No one ever talks about it and that needs to change. It is nothing to feel ashamed over. It is a disorder that can be overcome with the right support, treatment, or even counseling and medication depending on the severity. If you see a loved one struggling with these signs, I urge you to reach out. They most likely will be defensive and angry at first (like I was) but soon they will realize you are only trying to help.

"Trichotillomania is most commonly characterized by:

Most people with TTM pull enough hair that they have bald spots on their heads, which they go to great lengths to cover with hairstyles, scarves, wigs, or makeup. Others may be missing eyelashes, eyebrows, pubic, underarm, beard, chest, leg or other body hair, which they may camouflage with makeup, clothing, or other means. People frequently pull while reading, writing, working on the computer, talking on the phone, watching TV, or falling asleep. Some people are conscious of what they are doing and others are not. Most people pull in private, but some will pull mindlessly in public while doing one of the above activities.

I will leave you know with some success stories and motivation. if you are struggling with this disorder and have not reached out to anyone. I urge you to find someone you trust and let them know what is going on. Once you voice and identify the problem you will be able to start the recovery journey. it will not be easy and you may relapse liek I have many times. but it is better to start out and try! If you need any support, have any questions, or just want to get you feelings and frustrations out, feel free to email me at strengthandsunshine@gmail.com!

What Worked for Kali, via Kali

And here is the best Trich site if you want to learn more, finds ways to get involved and help out, and even find support.

Do you know someone who suffers or do you yourself suffer from Trichotillomania?

Have you recently overcome a huge hurtle or are on a journey of recovery for anything? How did you find the support and motivation you needed to start?

« Power Monday #11 HIIT It!
A Typical Lunch and My First Sprouted Black Beans »