Hey there! Happy Saturday! It is great to see you on the weekend for a change. I do have to admit, I was a little upset and stressed that the 21st fell on a Saturday, thus making me post for the Recipe Redux on a day I do not blog. But what can you do? It is worth it because I really liked this months theme. Here it is!

December's theme: Good Luck Foods! What will you be serving to get the New Year started with a little luck? Be it black eyed peas and greens, Chinese noodles or even a special family recipe you serve on New Year’s Eve or Day. Please share your good luck dish to start off 2014 in a healthy way.

I knew right away I wanted to do something with Black-Eyed Peas. I love them so much, but have forgotten about them in recent months. Black-Eyed Peas are said to be lucky because: "Considered good luck due to their penny-like appearance and abundance, these peas, enjoyed in the southern United States, are traditionally served in a dish called Hoppin' John. On the day after New Year's Day, leftover "Hoppin' John" becomes "Skippin' Jenny," meant to demonstrate frugality and promote prosperity in the new year." - Women's Day

Yes. Hoppin' John! I have made the dish only once before and did the traditional spicy tomatoes and pepper take. But I kind of figured a lot of people might do a traditional Hoppin' John recipe and wanted to switch things up. I also wanted to add in a few more good luck foods which include Pomegranates: "Pomegranates represent good luck in Turkey for many reasons: Their red color, which represents the human heart, denotes life and fertility; their medicinal properties represent health; and their abundant, round seeds represent prosperity—all things everyone hopes for in any fresh start," and Kale "From the coastal American South to Europe, people eat green leafy veggies—including kale, collards and cabbage—on New Year’s Day because of their color and appearance, which resembles paper cash. Belief has it, the more you eat, the more prosperous you’ll be." - Women's Day 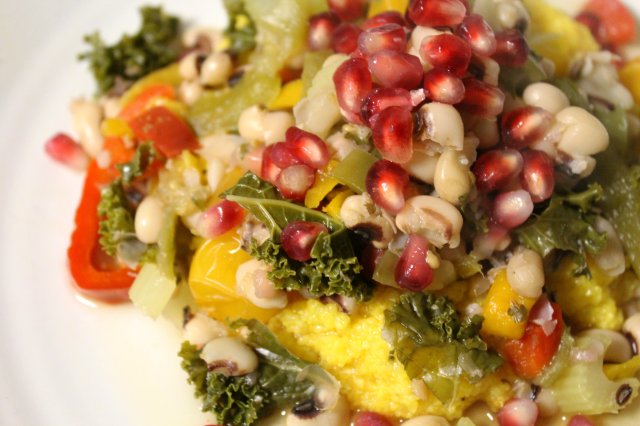 I served my creation over some smoky polenta that needed to get cooked. Then I realized cornbread is actually a lucky food to eat as well for New Years! "A favorite throughout the year, cornbread is especially venerated as a New Year’s treat in the southern United States. Why? Its color resembles that of gold. To ensure extra luck, some people add extra corn kernels, which are emblematic of golden nuggets." - Women's Day. So even though it wasn't cornbread per-se...It was still corn (and golden) so I am counting that as a 4th lucky ingredient! 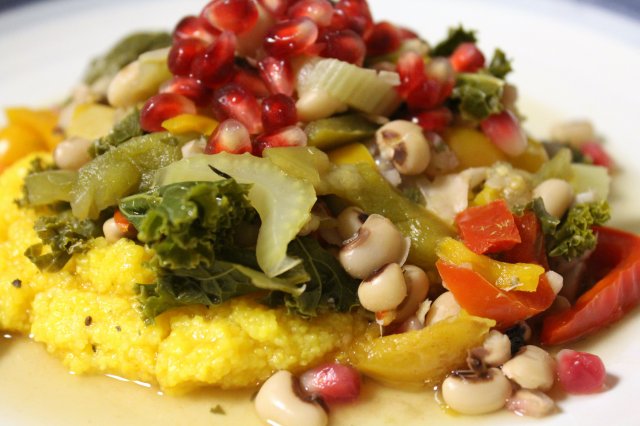 + 1 Cup Dried Black-Eyed Peas (Soaked over night, and cooked through one cycle in the rice cooker with a bay leaf) 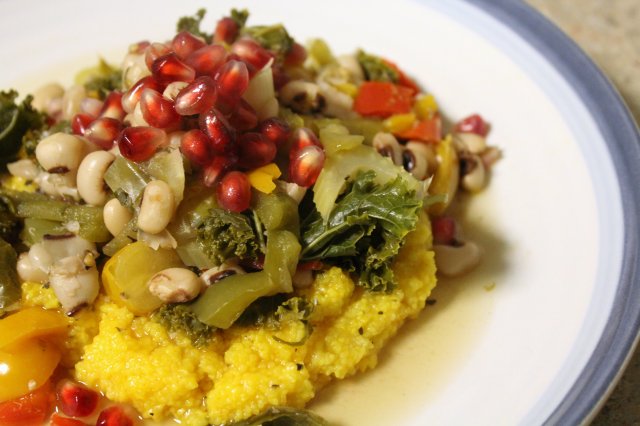 + First off make sure your beans are cooked. Then chop and prep all your veggies. Add all the veggies and beans to a large pot (not the pomegranate), add the lime juice and zest as well as all the spices, herbs, and liquid smoke. Add 1 cup of water. Stir everything together.

+ Place on the stove on medium heat (covered) and cook for 20 minutes. While the pot is cooking, de-seed your pomegranate. When the 20 minutes are up, add the pomegranate aerials (reserving some for topping at the end), stir, and cover for another 10 minutes.

+ While everything is doing its thing, cook the polenta. Bring about 3 Cups of water to a boil, add the polenta and seasonings, and cook on simmer (stirring every 30 seconds) for 6 minutes or until the water is absorbed. Then cover for 4 minutes with the heat off.

+ Once everything is done, plate the polenta first, top with Lucky Dancin' John, and finish it off with some pomegranate aerials! Enjoy and may good luck follow you into the New Year 🙂 2014! 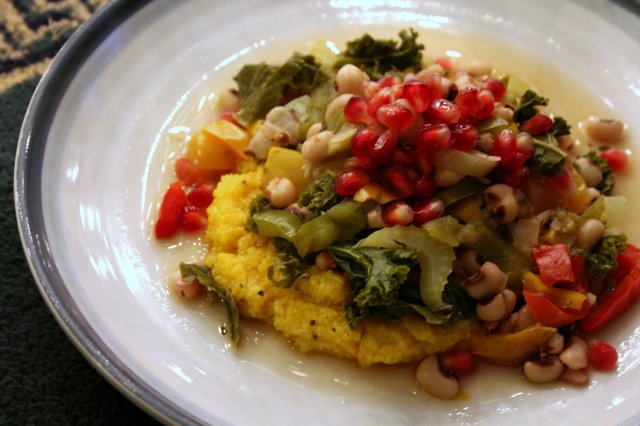 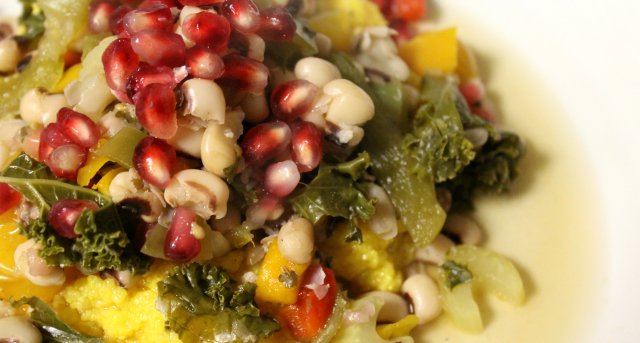 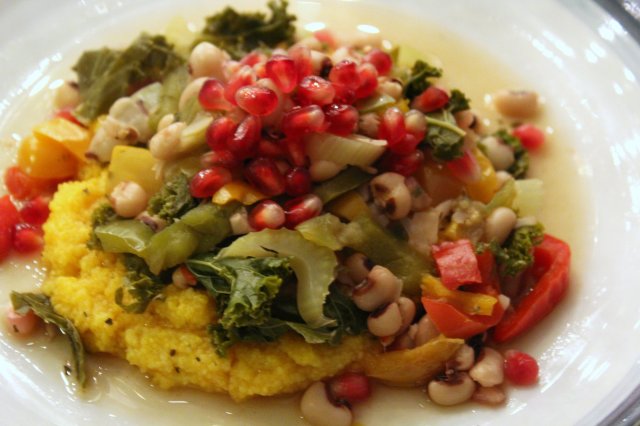 Click the Froggy Link below to see all the other Recipe ReDux members' awesome New Years recipes!

Do you have an lucky New Years traditions or foods you will be doing or making?

Don't you think New Years Eve should be the holiday...not New Years Day? Well maybe both should, but really New Years Eve is when people celebrate, so why go to work, just make it another national holiday!

Have a wonderful rest of your weekend! I finally got that Christmas shopping done, now I just need to put everything together 🙂 And I am struggling with figuring out my Christmas Eve/Christmas dinner menu! I don't know why but when I am forced to think of something to create or a recipe to take from I just can't decide. I want it to be perfect but I like to do something new on these special occasions. Plus it needs to be easily portable and re-heatable which really ruins everything. So this recipe is a possibility and maybe I will just make a new creative side dish...but I just don't know. And don't even get me started on trying to figure out the gingerbread recipe I am going to use..ugh! I am going to the grocery today so I only have a few hours to figure this out...HELP!

(Linking up with Wellness Weekend!)