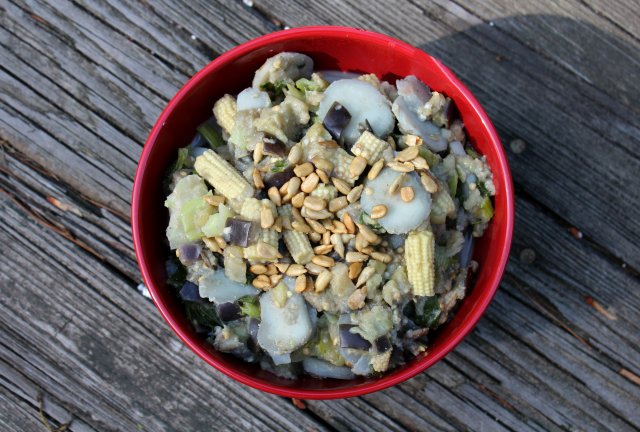 It was an unseasonably hot day in April down in Spartanburg, SC. Two weary travelers were exhausted form an early morning flight in from NJ and then directly walking around the Wofford College campus all day in the sun. But they knew they could not rest until they found a big enough bowl that was microwave safe. One weary traveler had a very special diet, thus breakfast would need to be eaten in the hotel room with the special mix of hot buckwheat cereal she brought with her.

They were on a mission now to find such a bowl. But it desolate Spartanburg there was nary a store that would have such a bowl. What were they going to do? As they drove around this ghost town, close to giving-up, they stumbled upon a small shopping plaza. In this plaza there was one store open and that happened to be a "Family Dollar".  Could this "Family Dollar" be the holy grail for microwavable bowls? In they went, holding their breath, crossing their fingers, and hoping for the best.

Up and down every aisle they went. But nothing was there. Until the one weary traveler skipped ahead a few aisles and came across the dishware. There in all it's shining red glory sat the red ceramic bowl. The only bowl in sight. It was beautiful. A full-sized, durable, microwave-safe, made in China red bowl! The weary traveler turned into a happy traveler at that. Her wallet was happy too.

She met up with the other traveler with a smile on her face and proclaimed that success was had! This traveler would not starve after all. They paid for the red ceramic bowl, hopped in the car with a new found energy and decided to rest, relax, and get ready for a nice dinner out. The red ceramic bowl would get it's moment to shine in the morning. When morning came early in the 6 o'clock hour, the traveler poured a mixture of creamy buckwheat cereal, unsweetened cocoa powder, peanut flour, cinnamon, and finally water in to the red ceramic bowl. She gave it a stir, covered the bowl with a napkin and popped it in the microwave for 3 minutes and 30 seconds. The microwave shot out a loud beep when the cooking was complete. The traveler opened the microwave hopeing that the red ceramic bowl had not exploded and was elated to see everything was intact and the cereal was cooked to perfection! 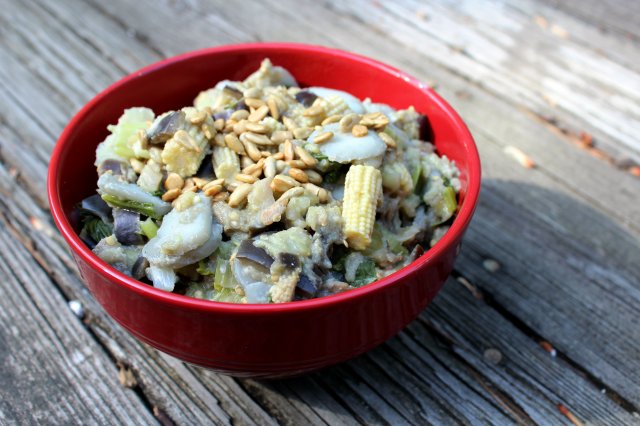 + Once you've prepped all you veggies, bring 1 cup of water to a boil in a large pot. Add the veggies, reduce heat to medium, and cook covered for about 20-30 minutes until the veggies are soft.

+ In the meantime, make the sunflower sauce. In a bowl simply mix together all the sauce ingredients.

+ Once the veggies are done, drain any excess water, pour in the sunflower sauce and give it all a good stir.

+ Serve over rice, quinoa, pasta, really anything you'd like! Or you can keep it just as a side to chicken or fish. Make sure you top it with extra roasted sunflower seeds before serving!

I really wanted some Asian food in my life, but since I have also been on the roasted sunflower seed train, I decided to combine the two. More food fusion? Thus, I decided to replace the traditional sesame flavor with sunflower instead! Was it a win? You bet! All served up in the red ceramic bowl too!

Back to the bowl story for a second. The traveler was worried how she should bring this beauty home in her suitcase on an airplane. She wrapped it up in clothing and prayed to the bowl gods that red ceramic would survive the flight. To her delight, all was well and they were able to live happily ever after.

+ Do you have a favorite piece of dishware or silverware? I really love this bowl. It is the perfect size for my large overflowing dinner bowls! So this baby gets a lot of use. He will be making the trek to DC with me in August, you can count on that!

+ Ever hit the jock-pot in an unexpected place like a dollar store? Surprise bargain hunting at it's best!